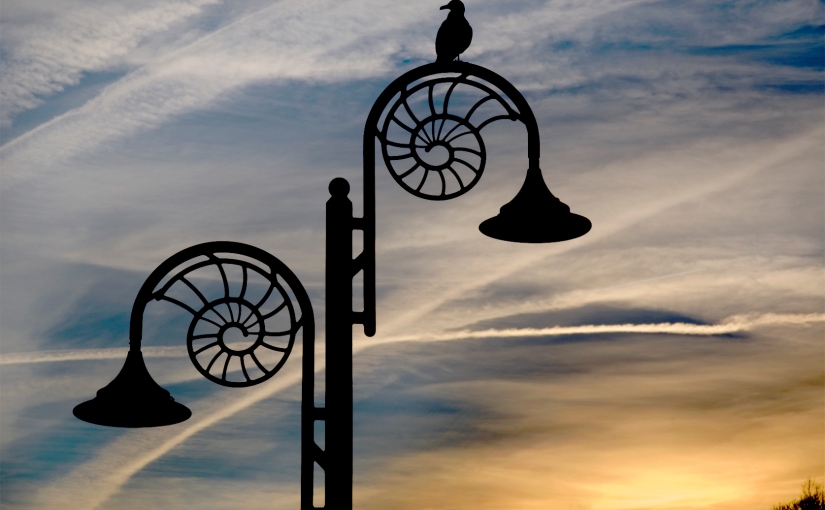 Up to now, we have seen how to input digital (on and off) information from a simple electromechanical device, the push-button, and how to output a digital signal to an LED. What if, instead of an LED, we wanted to turn on and off an actual household light. There are obvious electrical differences between LEDs and household lights. LEDs only require a few milliamperes of current and work very well in low voltage circuits such as the 5 volts provided by an Arduino board. A household light, on the other hand, requires mains electricity, between 110 and 240 volts depending on your location, and higher currents, between 200 milliamperes and one ampere. A microcontroller digital output cannot directly provide enough power to light a household light.

It the following sections, we will have a look at a few electronic and electromechanical devices: the relay, the diode, and the transistor.

Relays come in a variety of sizes and ratings. Ratings are used to select a relay to be used for specific applications. Automotive relays, for instance have rated coil voltages of 12 volts. Relays intended to be used in household appliances have rated coil voltages of 120 or 240 volts. Following is a list of relay coil ratings supplied by manufacturers.

Within circuit diagrams, the electromechanical relay is represented as a coil and contacts as in the following diagram depicting normally open and normally closed relay forms.

For the current project, we will use a 5 volts miniature relay, the FRS10C-S12, to turn on and off a household lamp. This relay has the following coil characteristics:

The chosen relay’s coil operates on 5 volts, suitable for an Arduino provided power supply, but requires 70 mA to operate, which is much larger than the rated output current of 20 mA that each Arduino digital output can provide. We need a device that can boost the current provided by the digital output pin to drive the relay coil. That device is a transistor.

Transistors, like other electronic devices, have specifications telling us about the electrical limitations of the devices as well as information about their capabilities. In the circuit that we will build later on, we will use a BC337-40 NPN Bipolar Junction Transistor. I have found the following information from the product data sheet provided at SparkFun.

Looking at the circuit above, an increase of voltage at Vin will get VBE to increase until it reaches 0.7 volts. Since no current flows through RBase, the voltage drop across the resistor is 0 volts and VBE = Vin. While VBE is less than 0.7 volts, the transistor is said to be in cut-off mode. As Vin is increased beyond 0.7 volts, current starts flowing through the base and collector, making the transistor enter the normal amplification operation mode. Following Ohm’s law, I = V / R, and since the current going through the base is the same as the current through the base resistor

The load to be turned on and off is the relay described earlier with a coil resistance of 70 Ω for a supply of 5 volts. At saturation, the collector current is 5 V / 70 Ω or approximately 71 mA. When connecting the base of transistor to an Arduino digital output pin through the base resistor, Vin is 0 volts when a LOW is output to the digital output and 5 volts when a HIGH is output to the digital output. Another way of stating this could be that any input voltage below 2.5 volts is LOW and anything above 2.5 volts is HIGH. Hence, we want a saturated transistor when the input voltage is above 2.5 volts. Assuming a transistor hFE of 250, we can use the equation to compute VLoad from Vin to compute RBase

The closest resistor value in my kit is 10K, which should be close enough. Lets now build the circuit. First, we replace the resistive load by the relay coil and we replace the base resistor with a 10 K resistor. The Vin input is replaced with the Arduino’s digital output pin 11.

Note the addition of a new device between the terminals of the relay’s coil. Its symbol resembles that of the LED that we saw in previous projects, but without the outward arrows. The device is called a diode. As for the LED, current flows in the direction of the arrow, from anode to cathode. The diode in this circuit serves as a protection for the transistor. The coil of the relay stores energy as it is turned on and it releases that energy when it is turned off as a voltage pulse that can damage the transistor by exceeding its maximum rated collector voltage. The diode acts as a short, preventing the spike from damaging the transistor. In normal operation, the diode does not let current through.

Let’s have a look at a graph plotting the voltage drop across the relay’s coil as a function of the voltage at the Arduino’s digital output pin.

The maximum base current is 5 V / 10 K, or 0.5 mA, a totally acceptable value for the Arduino’s digital output capability. The next step, is to connect a household device to the relay.

The following picture depicts how to connect the different parts using a solderless breadboard, jumper wires, a transistor, a diode, a relay, a push button and two 10K resistors. Connections to the household appliance are not shown.

The following Arduino program completes the post. Cut and paste the code in your Arduino IDE and download it to complete the project. It will toggle the lamp on and off at each press of the pus button.

The project in this post involves household mains high-voltages. Use caution whenever dealing with high-voltage wiring, including following directions carefully and following general safety practices. Safe assembly and operation of this project is the user’s responsibility. If unsure or if local laws prohibit the assembly of high-voltage circuits, get the help of a professional electrician. Do not make changes to the system while the device is plugged in.

More than 44 years working in the high technology sector, I now share tips and tricks on software and electronics. I also love to cook and to write in my spare time. View all posts by Michel Lagacé